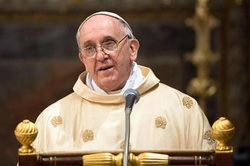 A stark contrast to the actions of  members of the US hierarchy lately, Pope Francis is preaching a gospel of tolerance from the Vatican leaving many commentators and Catholics wondering what implications this will have. Whereas Cardinal Timothy Dolan of New York is quite literally closing the cathedral doors to LGBT Catholics and failing their pastoral needs, the pope is demanding that every church’s doors be open wide to anyone who seeks Jesus Christ.

Kevin Clarke at America calls Pope Francis a “human pastoral quote machine” when he reports on the pope’s recent morning Mass homily about welcoming all:

” ‘Today’s mildly rebuked pharisees are the self-appointed pastoral border guards who hold up a hand in consternation instead of offering one in welcome when the less-than-perfect among us seek to gate crash at the house of the lord. ‘There is always a temptation,’ Pope Francis warned, ‘to try and take possession of the Lord.’ The pope spoke of an unofficial ’8th’ sacrament created by parish gatekeepers to throw up obstacles to those they deem unworthy…

“Pope Francis said, ‘Jesus is indignant when he sees’ such efforts to block people from sacramental life because those who suffer are ‘his faithful people, the people that he loves so much.’ “

Michael Sean Winters of National Catholic Reporter analyzes this homily, and identifies two challenges that Francis lays at the feet of American bishops: what it means to be a pastor and the limits of theology. He quotes the pope as saying:

“‘Jesus is indignant when he sees these things [Catholics being excluded]‘ – said the Pope – because those who suffer are ‘his faithful people, the people that he loves so much’

“‘We think today of Jesus, who always wants us all to be closer to Him, we think of the Holy People of God, a simple people, who want to get closer to Jesus and we think of so many Christians of goodwill who are wrong and that instead of opening a door they close the door of goodwill … So we ask the Lord that all those who come to the Church find the doors open, find the doors open, open to meet this love of Jesus.’

Winters questions prelates like Archbishop Charles Chaput who exclude a child from Catholic elementary school for having lesbian mothers. He notes the false torment of Catholic parishes and dioceses around the recent Boy Scouts of America decision to allow gay youth. Ultimately, he concludes that the pope’s message should change this dynamic by making clergy more about love than rules.

The second challenge from Pope Francis is a critique of intellectualizing faith, as if theology provides every answer and all guidance. Too often the LGBT community is greeted with technical terms and strict categorizations from priests bound by out-dated theology, not pastoral love. Winters writes in summary:

“Papa Francesco is challenging all of us, across the board, to re-think our attitudes and our ideologies, our certainties and our prejudices…It seems like the Holy Father is becoming the world’s parish priest, and I hope the actual parish priests (and their bishops) will follow his example. He is welcoming. He is challenging. He is straight forward. But, most of all, he is loving.”

In loving and inviting all who seek our Catholic community, Pope Francis provides an alternative to the standard policy of exclusion found in too many parishes and dioceses. He claims Jesus is “indignant” when Catholics cannot access the sacramental life of the Church, the opposite of what Detroit Archbishop Vigneron said when he told told Catholics who support marriage equality to stay away from communion. The pope is preaching words of welcome, just as many are asking, “Can LGBT Catholics find a home in the Church?”  This question can be answered positively if bishops around the world are listening to Rome, and on this matter, we must hope they are.